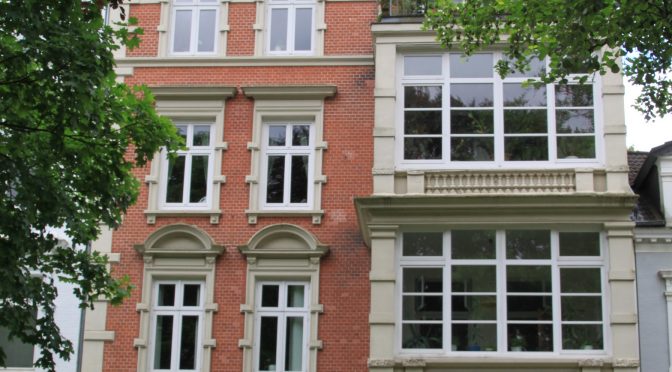 Astrid, what was it like to see the Beatles perform live for the very first time?

Astrid Kirchherr: For me it was a decisive incident which has changed my life completely. It was breathtaking. I had always want to become a photographer of portraits. Not that normal stuff, I had very special ideas what to do. Of the people I wanted to portray. And when I was listening to Elvis and Bill Haley, read about the Rockers and saw them on photographys it became my sort of thing. And then I went into the Kaiserkeller and saw even five of them.

Some weeks later you photographed John Lennon, Paul McCartney, George Harrison, Pete Best and Stuart Sutcliffe on the ferry („Dom“). Were these the first pictures of you being published?

That’s true. It was a good feeling because I liked the pictures, too.

How did you make the pictures?

I was alone, my English was a catastrophe. And then I touched them and said: „You stay like that, with your head in that direction.“ They did not move a bit.

Were you the muse of it all?

Oh, muse is an exaggeration. I was her friend which they trusted. Wether it was John, or Stuart my boyfriend. We influenced each other a lot. Very strongly. I learned a lot of them, especially their braveness to cope with difficult situations in life.

Your photographs were published in nearly every Beatles biography. What is it with your illustrated volume „When We Was Fab“?

Actually it’s my last book. Including my favourite photographys, with some which have not been published yet. I were allowed to contribute to the layout and it has became very pretty. It is dedicated to my friend George Harrison, his wife Olivia has wiritten the foreword.

These are picures from the sixties?

Yes, because in 1964 or 65 I have stopped completely. I still was working as assistent for photographers like wie Reinhart Wolf or Werner Bokelberg. But myself did not take any more pictures.

How did you colaborate with Max Scheler who died in February 2003?

In the Sixties Max was one of the most important photographers. For example he took pictures of the first transplantation of a heart living for for weeks in quarantaine with the patients. He was working for the „Stern“, later becoming the editor in chief of the magazine „GEO“. Together with him I was at the setting for „A Hard Day’s Night“ in 1964.

How did it get to this?

Beatles Manager Brian Epstein did not permit photographers. I called George because „Stern“ magazine askes me to be the door opener. George said: „I will talk to the others. According to me it’s okay when you come to London and take pictures. But they have to pay you, otherwise they may stay at home“. Max gave me a small camera which I never had worked with before. And there were some fine pictures as a result. Especially the pictures of children in Liverpool. Some of them looked really looked like figures in a Charles Dickens novel.

How important where his friends for George?

Very important. He took care of me all of my life. Every times I was in big trouble I just called him and he came to help me.

When they had reached that stage of success I felt sorry for them. It was not like today, with 20 bodyguards protecting so called stars. They had their roadmanager and no one else. And they could not go outside. I was living with Ringo and George, who had an appartment in Green Street. There were at least 50 girls around their door and nobody would have protected them. We put a bit of cardbox on the letter box because their fans were screaming through it.

Not at least. It is still like that even today.

As I concern this was one of the secrets for their immense success that all of them really loved each other. Their sense of humour was sensationel, because it was different for everyone. John was sharp, very intelligent. Stuart the same. Georg had an immense sense of humour but in a quiet way. Paul the same. And they all could laugh about themselves.

Did their sense of humour help them to cope with the people in St. Pauli?

All people working on the reeperbahn, the waiters and other employees, were all very fond of them. Because they were so funny and kind. Aunt (Tante) Rosa, who was working at the toilet of the top ten club gave her boat to Paul so that he could stay there with his girlfriend. And she was dealing with Preludin, selling each pill for a Deutsche Mark. She was old at that time, wearing an apron. You would never had thought she was dealing with prellys.

Did you have problems with the rockers at St. Pauli?

We were exis, existentialists and the Reeperbahn was not our usual place. But because the Beatles were our friends sitting at our table in the clubs between their performances, the rockers found us interesting. And they were not so aggressive between us. Some of them were nice and realized that we were persons you could talk to and have a laugh.

Will you meet Paul McCartney when he performs in Hamburg?

Normally Paul would call and say when he arrives. I would be driven to his wardrobe, we would have at cup of tea and talk.

Why not? George at least did that and had a walk to the Kaiserkeller and was amazed when he came back: „There was a plate of iron and our names are written on it

I was alway wearing ballet shoes at that time, which I bought at Anello & Davide in London. When I went there with Stuart we saw spanish flamenco boots, which he bought in order to be bigger. These boots had a gum, so that the flamenco dancers would not fall down. And they had heels to create that sound, when they would stamp their feet on a floor of wood.

I hate them. The singer must have watched john Lennon videos for weeks. He is copying John in perfection, his movements with the mouth and how he held his head. They don’t have style. Horrible. And I don’t like the wy they behave, in an aggressive and stupid way.

Oasis do like Football, they are Fans of Manchester City. Do you like football or the football club of St. Pauli?

(long break). I believe Ringo was interested in it. But I am not absolutely sure about it.
Interview Matthias Greulich

Any cookies that may not be particularly necessary for the website to function and is used specifically to collect user personal data via analytics, ads, other embedded contents are termed as non-necessary cookies. It is mandatory to procure user consent prior to running these cookies on your website.